The technology of Light-Emitting Diodes is increasingly replacing conventional bulbs in public and industrial lighting systems. When replacing an HID Lamps power (50W - 1000W) the choice is often between: LED retrofit Kits ( LED Modules or HID LED Corn Cob Lamps) or new LED Fixture. The lower price, comparable warranty and the fact that it is much easier to install an LED retrofit in many cases makes this the more desirable option. Although there are always those who are critical of retrofit technology due to the proliferation of cheap non certified low quality products, in most cases they merely clinging to prejudices that exist as a result of good lobbying and are not informed with respect to the high quality retrofit options in the market. In this discussion we will address the advantages of using LED retrofit technology, and is intended to assist the user in making a more objective decision as to where the Fixture retrofit approach makes sense and where it does not.

1) Life Cycle and temperature The concept of Life Cycle or "service life" in connection with LED light Fixtures and bulbs is subject to interpretation as far as relevant parameters go. Details such as 50,000 hours, 100,000 hours or even longer are listed however to most people these ranges really are subject to interpretation. The true measure is actual light output of the product. This figure almost always specifies the time in which the loss of luminous flux of the LEDs amounts to 30% when used under precisely defined ambient conditions (the L70 value), and therefore only has little to do with the service life of the product, It all depends on how and where it will be installed. In a very hot environment the life cycle will be reduced as compared to a cool environment.

The often overlooked component with the a significant influence on the lifetime of the product is the power supply unit or driver electronics. The electronic components of these units are subject to the same deterioration process as all electronic parts including the LED arrays, but a failure of the power supply unit means total failure of the entire lamp. It is safe to assume that the power supply unit will require replacing at least once during the lifetime of an LED Fixture, and for luminaires with poor thermal management more frequent replacement may be necessary. With all LED luminaires this can be carried out with varying effort. The LRK Retrofit Modules used for converting existing fixtures into LED fixtures afford the highest quality LED drivers by meanwell and are specifically designed to operate in the harshest of environments. The separate design allows for the individual units, LED array and power supply, to easily be replaced, enabling the service life to be extended. 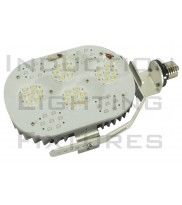 2) Maintenance Conventional bulbs - mercury vapour or sodium lamps - are replaced on average every 2 to 3 years because of either completely failing or no longer giving off enough light. After 4 years, i.e. around 16,000 operating hours, the loss in luminous flux in LEDs with good thermal management is in the region of 5%, which is still far in advance of the maintenance interval. It goes without saying that replacing the older HID technology with LED’s is the best possible strategy. However the question then arises, should we retrofit the existing housing with and LED retrofit option ( LED modules and LED Corn lights) or buy a LED fixture with its custom LED lighting Array? Let’s remember that there is no failsafe option however most integrated LED fixture parts ( LED arrays, LED power supplies) are not interchangeable and are proprietary to the specific LED fixture, thus the only replacement option is through the manufacturer. Whereas LED retrofit Kit parts are interchangeable and can be sourced through various vendors. The LED Corn Light option can be as simple as unscrewing the Metal Halide lamp and replacing it with the ICBC Series LED Corn Cob light. The ICBC Series is both ballast compatible and has the ability to be directly wired to the power source. This is by far the simplest retrofit option , can be easily serviced and costs a fourth of what a new fixture would cost with the same energy savings and warranty.. There are still LED lights on offer where this retrofitting option is not available at all. However, many manufacturers are providing for this option by means of a modular structure for their LEDs. In the case of complete lamps it is therefore essential to ensure that both the power supply units and the LED modules can be replaced easily and inexpensively. 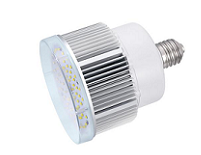 3) Energy efficiency is simply not a measure of lower power consumption, but ultimately how much light you receive on the road, path or square for the input energy. Due to optimized optics or specially arranged LEDs, complete LED luminaires have an advantage over LED retrofit Kits in this regard. These retrofit Lamps are designed for universal use and are not optimized for a particular lamp or specific lighting application. The actual degree of efficiency of an LED retrofit bulb is therefore significantly affected by the type of lamp in which it is used. Measurements with various types of luminaires have shown that it is very often possible to substitute 400 Watt Metal halide lamps with our IC120-5000kIP64 , and 80-125 W mercury vapor lamps with our ICM30-5000KIP64 version. The measured illuminance levels compared with the HID lamp were consistently higher with mushroom or bell luminaires than with case luminaires. 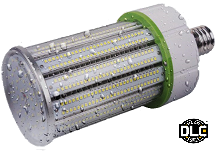 4) An LED retrofit bulb (Corn Cob LED) is priced at approximately ¼ of the cost of an LED Luminaire. Yet the energy savings compared with complete LED lights are similar. This means that the payback time is also only ¼ of that of complete LED lamps. In addition to comparatively low installation investments and the associated short payback periods, future proofing is another aspect that speaks in favor of retrofits. By using standard bases - E27 or E40 - it is always possible to change to the most efficient LEDs available at the time, without costly conversion. Even if the drivers and LED modules can be serviced or replaced in the lights of many manufacturers, this conversion involves another investment that may not be insignificant, and, depending on the manufacturer, also require considerable labor. LED retrofit bulbs with their standard base, on the other hand, can easily be replaced with the latest generation of bulbs in case of a maintenance issue.

6) Summary There are various scenarios that speak in favor of the one or the other solution. In the case of high output levels above 400 Watt with LED or for stylistic reasons, there is a strong argument for using complete lamps. Retrofit bulbs are often the more sensible alternative when the maximum available power is adequate and the existing luminaire heads still have sufficient remaining service life. Ultimately, a decision must be taken as to which scenario is the best in economic terms; technically, neither of the two should be excluded.